S1MBA performs at New College Swindon for Music Production Students ‘I would not be where I am now if I had not done this course.’ 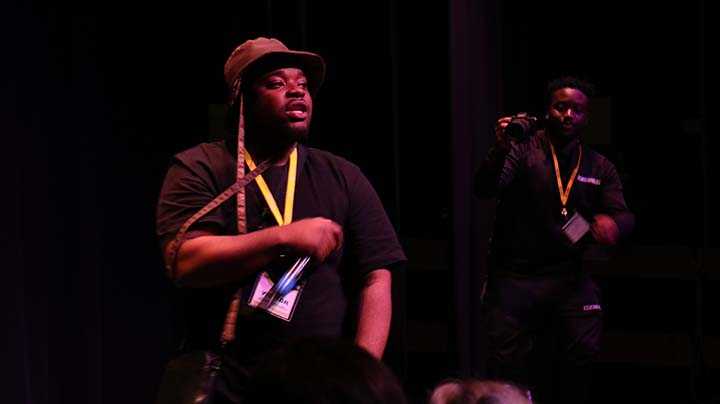 On Friday 8th October New College welcomed back a previous student, and a familiar face to our music department, Leonard Simbarashe Rwodzi, better known by many as S1MBA. S1MBA has had a busy year with his single ‘Rover’ nominated for best new British single at the prestigious Brit Awards, going up against well-established industry heavyweights Stormzy, Dua Lipa, and Harry Styles. As well as the success of his single Rover S1MBA signed to a record label and performed up and down the country and amassed tens of millions of views on YouTube and a dedicated fan base. S1MBA returned to New College Swindon to talk with current music production students followed by a short performance including his top ten hit ‘Rover’ and his single ‘Loose’ featuring Youtuber and Rapper KSI. 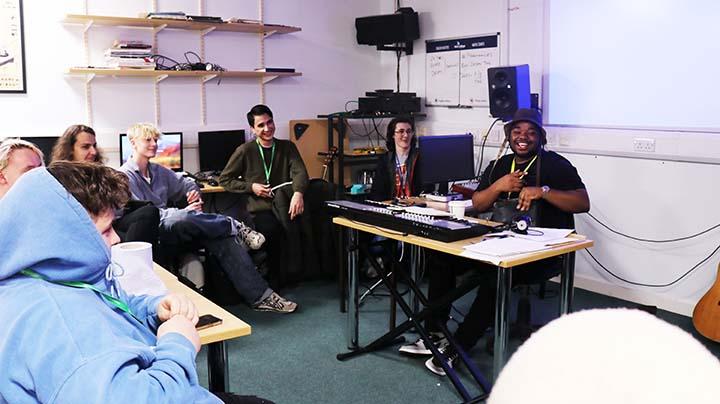 S1MBA talked with the College’s current music production students, answering questions and looking back fondly on his time as a student. As a student S1MBA was forever booking out the New College recording studio, recording his debut single ‘The Plan’ here. It was clear S1MBA had found his calling, initially starting off creating backing tracks for others to use for their lyrics; S1MBA cut out the middleman and began writing his own lyrics - a move that would put him securely on the path to success.

Talking with students, S1MBA outlined some key pieces of advice for anyone looking to get a leg up in the music industry. Describing his process for creating a track, he mentioned the importance of personal experience and getting out and doing things, simple things like holidays, parties, and other opportunities always provide material and inspiration for the young artist. As for getting noticed on a budget, S1MBA gave excellent advice regarding the use of social media and ‘shameless’ self-promotion, humorously reminiscing how he would flood friends, family, acquaintances, friends of friends with notifications for any new music he had made. Saying he took any opportunity to push his music, putting his pride to the side and taking opportunities as they presented themselves. S1MBA’s masterful use of social media to promote himself, lead to his music being noticed by wider audiences, eventually leading to his single ‘Rover’ providing the soundtrack for a TikTok ‘challenge’.

S1MBA addressed his feelings of anxiety, and the pressure success brings; ‘how do you top that?' 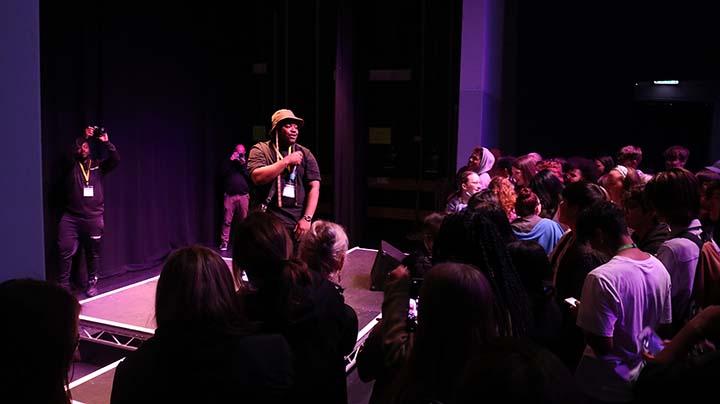 He reminded students that ‘you are all musicians, that’s why you’re doing all this (the course)’ telling them that thanks to social media, there’s never been a better time to be a musician. S1MBA brought his talk to a close by thanking his past lecturers and technicians saying ‘I wouldn’t be where I am now if I hadn’t done this course’

With the talk concluded. S1MBA took a short tour of his old recording studio, then headed for the stage, performing two of his singles to an enthusiastic and responsive crowd of students and staff.

CHECK OUT THE FOOTAGE FROM THE PERFORMANCE AND INTERVIEW