Art Student Angel Brasier-Dinning (pictured left, below) had spent weeks working on a painting that was being displayed as part of a recent student art exhibition in the foyer at New College Swindon.

She was very pleased with the work, depicting a female torso. It came as a great surprise when she then received an offer to buy the piece, from a member of the College's own support team.

Kat Armstrong, who works as the Office Manager to the Principal, had seen the painting and was immediately taken by it.

Kat said, “I can’t remember the exact date when I first saw the painting but it went up as part of a College exhibition sometime in December 2020 and I was immediately drawn to it, and knew that I wanted to buy it. After a week of walking past it every day, I sent an email to the Art department to ask if it was for sale and it all went from there!”

“I was instantly drawn to the colours in the piece and the depth that they give to it. I also really love that it’s a female form that really looks like an actual human, rather than a fashion piece as you see in a lot of media. As a queer woman I think true representations of what ‘normal’ women and ‘normal’ bodies look like in art is especially important, and this piece really nails that for me.”

“I own two small original oil landscapes but this is the first painting I have bought of this size and my first form painting which is very exciting!”

Speaking about New College, Angel says, “There are so many helpful staff members and I get a lot of opportunity to experiment with media and really pushing the boundaries of scale and expression.”

It certainly is a very striking piece and a large canvas. Angel says, “When we were choosing a canvas for the work, I knew I wanted to go large and this was the largest canvas available. I had not done anything on this scale before, but this turned out so well I definitely want to do more like this.”

Angel explains the inspiration and concept behind the work, “This is inspired by concept of “Folds”. I thought about the way skin looks when we fold and move and wanted to use that for my painting.”

“I was super excited when I heard Kat had offered to buy the piece; this is the first piece of art I have ever sold! I have been working on it at home and I think my parents were hoping they would be able to keep it, but I am delighted to have the opportunity to sell it.”

Angel has studied Foundation Art & Design at New College for one year and will be going on to study Fine Art and History at Goldsmiths College in London, “I had heard about the course at New College and wanted to further my practice before beginning my degree. It has definitely helped me with self-delivered work and individual styles and interests.”

“It’s a really exciting time for me,” she says, “and I’m so pleased that someone likes my work so much they want to pay me for it. I feel I can really call myself an artist now.”

The next challenge is getting the work to its new home - at nearly 5ft high and 4ft wide, the canvas is going to be difficult to transport: “My Dad has been helped me bring this into College, and has to put the seats down in his car to get it in!” says Angel.

“I drive a VW Up,” laughs Kat, “so that’s going to be a real challenge. Maybe I can speak nicely to the Facilities Team at the College to see if I can borrow a minibus?”

And that’s not the end of the challenges; “I told my partner I wanted to buy this painting, but I didn’t tell them how large it was, and I’m not sure we have a wall in the house large enough to hang it. We might have to put it at the head of the bed for the time being!” 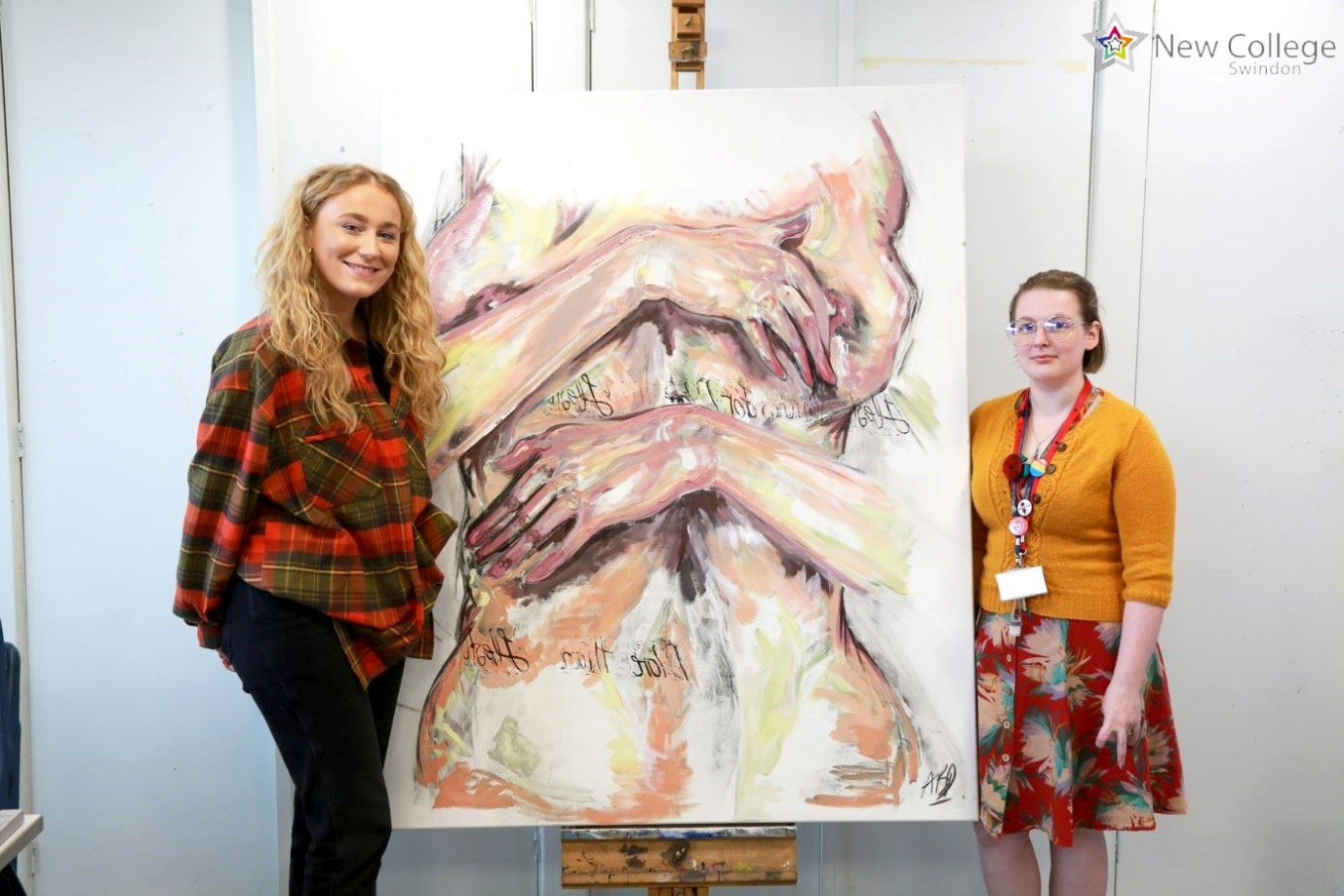